In this article I’m going to explain the difference between the concepts of view children and content children in Angular. We will take a look at how we can pass access these two different kinds of children from their parent component. Along the content we are also going to mention what the difference between the properties providers and viewProviders of the @Component decorator is.

You can find the source code of the current article at my GitHub account. So lets our journey begin!

First of all, lets clarify the relation between the component and directive concepts in Angular. A typical design pattern for developing user interface is the composite pattern. It allows us to compose different primitives and treat them the same way as a single instance. In the world of functional programming we can compose functions. For instance:

Composition in the UI

In user interface we can apply composition in a similar way. We can think of the individual component as functions. These functions can be composed together in order and as result we get more complex functions.

We can illustrate this graphically by the following structural diagram: 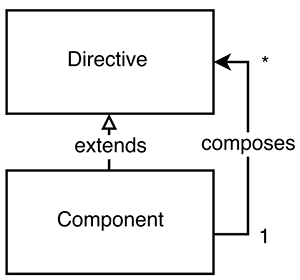 In the figure above we have two elements:

This means that using the preceding abstractions we can build structures of the following form: 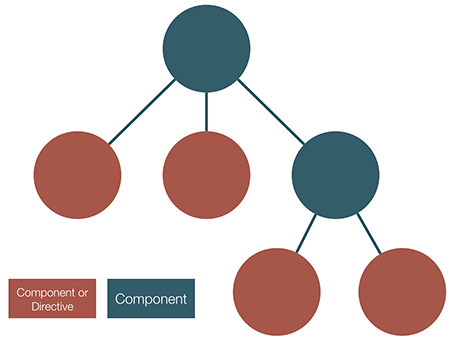 Composition of Components in Angular

Now, in order to be more specific, lets switch to the context of Angular.

In order to better illustrate the concepts we are going to explore, lets build a simple application:

Yes, this is going to be “Yet another MV* todo application”. Above we define a component with selector todo-app which has an inline template, and defines a set of directives that it or any of its child components is going to use.

We can use the component in the following way:

Well, this is basically an XML, so between the opening and closing tags of the todo-app element we can put some content:

Now lets switch back to the todo-app component’s definition for a second. Notice the last element in its template: <ng-content select="app-footer"></ng-content>. With ng-content we can grab the content between the opening and closing tag of the todo-app element and project it somewhere inside of the template! The value of the select attribute is a CSS selector, which allows us to select the content that we want to project. For instance, in the example above, the app-footer will be projected at the bottom of the rendered todo component.

There are two more components which are not interesting for our discussion so we are going to omit their implementation. Once completeld our application will look as follows:

Now comes the interesting part! Lets see how we can access and manipulate these two types of children!

Playing around with View Children

Another thing to notice are the types of the inputComponent and todoComponents properties. The first property is of type TodoInputComponent. It’s value can be either null, if Angular haven’t found such child, or a reference to the instance of the component’s controller (in this case, reference to an instance of the TodoInputComponent class). On the other hand, since we have multiple TodoComponent instances which can be dynamically added and removed from the view, the type of the todoComponents property is QueryList<TodoComponent>. We can think of the QueryList as an observable collection, which can emit events once items are added or removed from it. We can access the Observable wrapped by the QueryList with its changes property. For further information click here.

Since Angular’s DOM compiler will process the todo-app component before its children, during the instantiation the inputComponent and todosComponen properties will have value undefined. Their values are going to be set in the ngAfterViewInit life-cycle hook.

Almost the same rules are valid for the element’s content children, however, there are some slight differences. In order to illustrate them better, lets take a look at the root component, which uses the TodoAppComponent:

Alright! We’re almost done with our journey! As final step lets see what the difference between providers and viewProviders is (if you’re not familiar with the dependency injection mechanism of Angular, you can take a look at my book).

Lets peek at the declaration of the TodoAppComponent:

Inside of the @Component decorator we set the viewProviders property to an array with a single element - the TodoList class. The TodoList class holds all the todo items, which are entered in the current session.

However, if we try to inject this service in FooterComponent’s constructor we are going to get the following runtime error:

This means that providers declared in given component with viewProviders are accessible by the component itself and all of its view children.

In case we want to make the service available to FooterComponent as well we need to change the declaration of the component’s providers from viewProviders to providers.

Why would I use viewProviders, if such providers are not accessible by the content children of the component? Suppose you’re developing a third-part library, which internally uses some services. These services are part of the private API of the library and you don’t want to expose them to the users. If such private dependencies are registered with providers and the user passes content children to any of the components exported by the public API of your library, she will get access to them. However, if you use viewProviders, the providers will not be accessible from the outside.

In this article we took a brief look at how we can compose components and directives. We also explained what the difference between content children and view children is, as well as, how we can access these two different kinds of children.

As final step we explained the semantics between the viewProviders and providers properties of the @Component decorator. If you have further interest in the topic I recommend you the book I’m working on “Getting Started with Angular”.