So far, most of the blog posts I’ve written are tutorials; they explain how we can use given technologies, architectures, algorithm etc. For instance:

The code for the current research could be found here and here.

The current post is about an exciting project I am working on in my spare time. A few days ago I explained my motivation behind the “Community-drive Style Guide” for Angular 2 that we’re working on. I also mentioned that I am planning to build a configurable static-code analyzer, which makes sure given project follows best practices and contains “correct” Angular 2 code. I called this project ng2lint.

In this article I will explain the main goals of the project, as well as its core challenges and possible solutions. I will also show my current progress. Lets start with the main goals:

We can make sure given project follows some predefined style guidelines by using a standard linting, such as the one introduced by tslint. The Angular 2 Style Guide provides a sample tslint configuration file, which can be used.

As extension of the functionality provided by tslint the ng2linter should introduce file name validation, based on the conventions defined in the style guide.

Although in most cases there’s a good understanding of what best practices are, some of them, especially the ones related to coding style, on big extent depend on personal preferences. This means that a universal static-code analyzer should be configurable.

For instance, according to best practices described in the Angular 2 style guide directives should be used as attributes and components should be used as elements. However, in a legacy project which uses different naming we should be able to bend ng2lint to adjust the project’s specific conventions.

By saying correct I mean that the project follows some rules, which are enforced by the Angular framework and without following these rules our Angular application will has a run-time error. Using static code analysis we can verify that:

ng2lint is supposed to work with the current tools provided by the ecosystem that developers use. This means that in order to see warnings in your favorite IDE or text editor you should not be supposed to develop a custom plugin.

Performance is an important characteristic. In the perfect scenario ng2lint should run its validators for just a few seconds over a big and complex project.

Since TypeScript is a statically typed language it already provides some extent of type-safety. This means that huge part of the code’s validation is responsibility of the TypeScript compiler. It will slap our hands in case we’ve misspell an identifier name or keyword.

Project like this will allow us to receive text editor/IDE warnings for:

In order to have better understanding of the up following sections we need to make a quick introduction to parsing, which is core concept in the compiler’s design and implementation.

The input of any compiler is a file which contains a text that needs to be processed. Two top-level goals of each compiler are to:

For our purpose we are interested only in the first goal, which is part of the front-end of the compiler.

Before explaining the challenges and the current results I got in ng2lint, let make a quick overview of how the front-end of a compiler works. The modules we’re going to explain are:

This abstract explanation will get more clear in the end of this section. You can read more about context-free grammars here.

The main purpose of the lexer (a.k.a. tokenizer, scanner) is to take the input character stream and output a stream of tokens. Each token has a “lexeme” which is the actual substring of the program and a “type”.

For instance, lets take a look at the following program:

We can implement our parser so it returns an array of JavaScript object, each of which represent an individual token. The first a couple of tokens are going to be:

If you are interested in further reading about lexical analysis I’d recommend you to get familiar with:

Now we have a stream of tokens. For a syntax-directed compilers this could be enough. However, in most cases we need to build an intermediate representation of the program which brings more semantics and is easier to process by the back-end of the compiler. As input for creating this intermediate representation the parser uses the token stream we got from the lexer and the grammar associated to the programming language.

The process of developing lexers and parsers usually contains the same repetitive steps across compilers for different languages so that is why there are tools which allow you to generate the code for these two modules based on given grammar.

Deep-dive in parsing is out of the scope of the current article but lets tell a few words about the basics. What is this “intermediate representation” that the parser builds based on the token stream and the language’s grammar? Well, it builds a tree, more accurately an abstract syntax tree (AST).

Lets take a look at the AST of the program above: 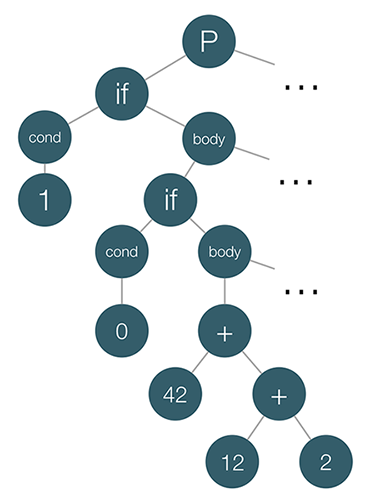 In case you’re interested in further reading about parsers, take a look at the following resources:

We’re almost done with the theory behind ng2lint. In this final step of the “Crash Course in Parsing” we will just peek at the back-end of any compiler by introducing a classical design pattern which is exclusively used there.

In object-oriented programming and software engineering, the visitor design pattern is a way of separating an algorithm from an object structure on which it operates.

How we can use this pattern in order to interpret the program we defined above, using its intermediate AST representation? We want to have different algorithms for processing the AST, for instance:

This means that the visitor pattern is perfect for this purpose - we will develop an algorithm for processing the AST but we won’t couple it with any of these algorithms.

Here’s how we can develop a visitor for this purpose:

Now all we have to do in order to interpret the program is:

tslint for instance, uses similar approach for the implementation of the rules it provides.

In the snippet above we have definition of two classes:

Will fail with type decoration of 'any' is forbidden.

Now lets take a look at the goals we defined earlier and see how we can take advantage of already know in order to achieve them.

We can achieve this goal by using tslint as well. Verifying that given source file follows defined style guidelines involves static code analysis similar to the one performed by the rules declared by tslint and the ones developed by the community.

This is the most challenging part of ng2lint because of the following reasons:

Lets discuss approaches for handling some of these challenges.

TypeScript does not parses the Angular templates

Suppose we have the following component definition:

Once TypeScript’s compiler parses Angular program the AST will look something like: 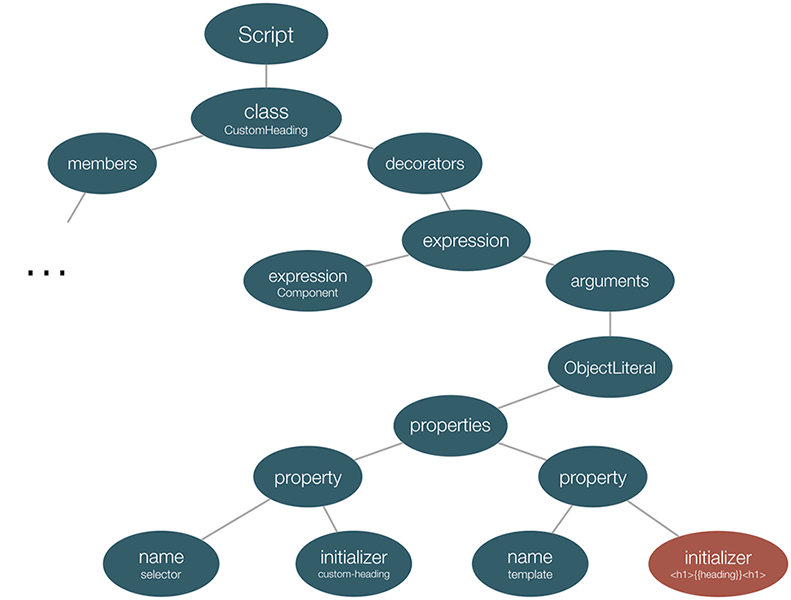 Notice the red node in the bottom-right - it is the initializer of the second key-value pair from the object literal that we pass to the @Component decorator.

Since it is not responsibility of TypeScript to parse Angular’s templates it only holds their string representations, or in case of templateUrl their paths.

Fortunately, Angular 2 exposes its TemplateParser. Thanks to Angular’s platform agnostic implementation and parse5, TemplateParser could be used in node environment. It allows us to parse the templates of our components using the following API:

In case CustomHeadingComponent is a top-level component we can parse its template with:

The parse method will return an HtmlAst which can be validated with visitor, similar to the one we use for validation of the TypeScript code.

Definitions of directives and components which need to be resolved

Now lets suppose we have the following components definitions:

Lets suppose we want to validate the template of component B:

The parser will throw an error similar to:

This happens because we haven’t included the directive D in the array we pass as second argument to parse.

Alright, now we are done. There are two things to note here:

We will see what we can do for the I/O operations in the section: “Externalized templates which need to be loaded from disk”, which is generic and could be applied for templates as well as for directives.

Once we’ve gathered useful information for the component tree, lets introduce the algorithm which can be applied for validation:

The final thing left here is the procedure for validation of the template’s expressions. Why we haven’t solved this yet?

Lets take a look at the following component:

If we parse this source file using TypeScript’s parser and after that we parse its template by using Angular’s TemplateParser we will get: 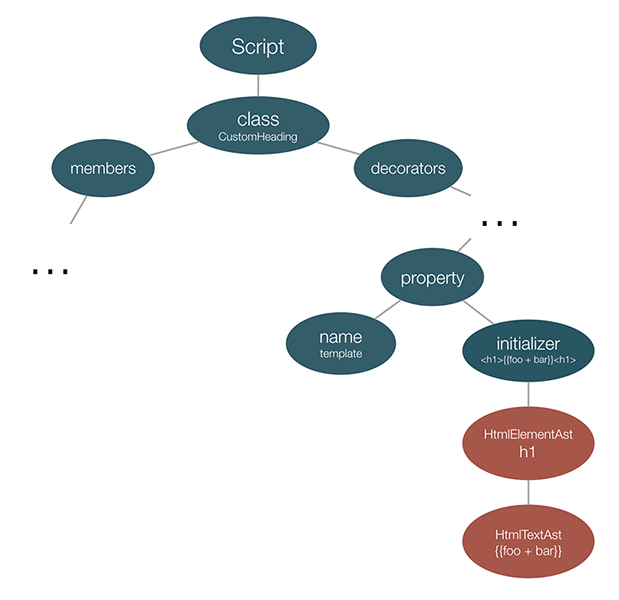 On the image above we can see two ASTs merged together:

The problem now is that although we’ve parsed both the source file and the template, we haven’t parsed the Angular expression. Angular defines a small DSL which allows us to execute different expressions in the context of given component.

In order to verify that the above expression {{foo + bar}} could be invoked in the context of CustomComponent we need to go through another process of parsing. For this purpose we can use Angular’s parser defined under core/change_detection/parser/parser.ts.

We need to get reference to its instance and parse the expression. After that we’ll get the following mixture of ASTs: 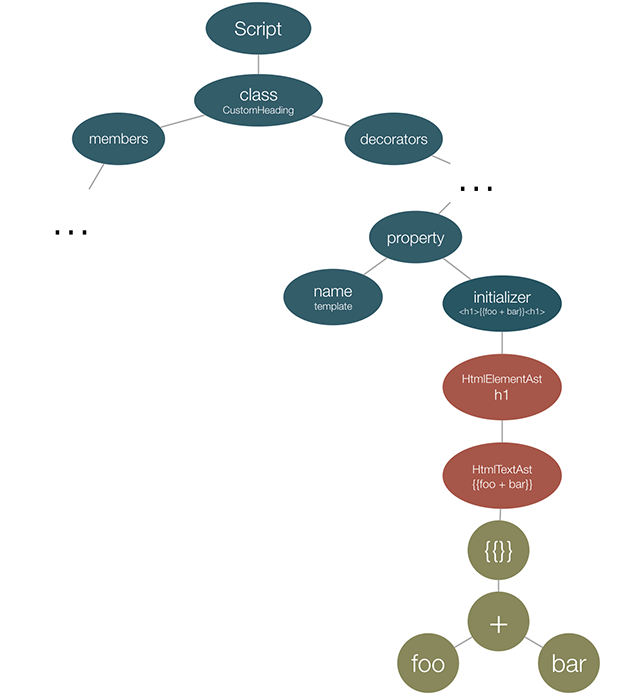 Now, at this point, we can traverse the bottom most AST and see whether the identifiers there exist in the corresponding symbol table (which is the instance of the CustomComponent controller).

Externalized templates which need to be loaded from disk

Now lets suppose instead of template our component uses templateUrl. This means that the validator need to read the template from the disk, in a directory (usually) relative to the component’s definition.

The disk I/O operations are slow:

This means that in the perfect scenario we want to read external templates from the disk only when they change. This could be achieved with something like fs.watch or any of its high-level wrappers. Once a change is discovered, this need to update only the impacted region.

A few weeks ago I developed a few rules for tslint which add some custom Angular 2 specific validation behavior. The project is located in the master branch of the ng2lint repository.

According to npm on average it has 150 downloads per day.

The rules I develop include:

Possible improvement here is extension of the default walkers that we already have with AngularRuleWalker. For instance adding operations such as:

could save us form a lot of boilerplate code in ng2lint.

Another possible extension is validation of the file names we lint based on a semantics gathered from the file’s content.

For instance, if we find out that inside of given file there’s definition of a component we can validate that the file name follows the name convention:

The last weekend I spend playing with more advanced implementation of the linter which aims validation for correctness. The entire progress is located in the advanced branch of ng2lint.

In this branch I implemented the following:

The process of building a complete linter for Angular 2 is quite challenging because of several reasons:

Fortunately, neither of the challenging tasks is not related to nondeterminism introduced by the framework. The Angular core team did great design decisions for making the static code analysis and tooling possible.