In this blog post, we’ll make a brief introduction to what Bazel is and how we can build our TypeScript projects with it. If you’re already familiar with the problems that Bazel solves, feel free to skip to the section “Building TypeScript with Bazel.” You can find the example from this blog post in my GitHub account.

The projects in Google use a single version for the individual libraries in the organization (including the third-party ones.) This simplifies the dependency management in the company dramatically. Another huge bonus of this convention is that an update of a library affects all the dependent projects. This way everyone can take advantage of the latest security fixes, performance improvements, and bug fixes. Following this process means that when Microsoft releases a new version of TypeScript, it gets synced inside of Google as soon as possible so that all the projects can take advantage of it. As you can imagine, changes in the type system of TypeScript may break a lot of code!

To verify that nothing broke after a dependency update, the internal CI rebuilds all the dependent projects and executes their tests. Having millions of lines of TypeScript and hundreds of thousands of TypeScript files, this process may take a while if not done right!

Often projects depend on other projects. For example, Google Cloud depends on its UI and back-end services. When we update TypeScript, we don’t want to rebuild the back-end services if they don’t rely on the language.

Google open sourced the software responsible for building most of our projects under the name Bazel. Bazel is a powerful tool which can keep track of the dependencies between different packages and build targets. For simplicity, we can think of a build target as a build rule - for example, “build a TypeScript library”; a package, on the other hand, is a directory with the files inside of it and specification of the dependencies among them. In the Google Cloud example above, Bazel will come up with a dependency graph similar to the one below:

For simplicity, we can map the boxes from the diagram to build targets. When the output of a given target changes, Bazel will calculate which other targets depend on it directly or transitively and rebuild them. In the example above, if TypeScript changes, Bazel will rebuild Angular, Angular Material, Google Cloud’s UI but it’ll leave the back-end services untouched.

Some of the cool features of Bazel are:

Let us take a look at the first point. Based on the dependency graph of a project, Bazel determines which targets it can build in parallel. Such a feature is only possible because the individual units have well-defined inputs and outputs, and they don’t produce side effects. To some extent, we can think of them as “pure functions.” One of the benefits of such a computational model is that it’s straightforward to optimize the calculations using parallelism and caching. That’s true for Bazel as well. It can cache the produced outputs from the individual build tasks anywhere, including in the cloud.

Why does the cloud cache matter? If Bazel has built a target and cached it in the cloud, anyone can reuse it without building it from scratch! If you’re a large organization, this is quite attractive, but even small teams can take advantage of such a feature. Bazel is not coupled to any particular cloud platform, which means that you can take advantage of the remote build execution and caching in Google Cloud, Azure, AWS, or your on-premise infrastructure.

For this example, we’ll build a small TypeScript project to an ES5 JavaScript bundle. The project is a little programming language which has the following modules:

You can find the example here. The directory structure is as follows:

The tree above looks like a standard TypeScript project - we have a bunch of *.ts files, package.json, and tsconfig.json. We also have WORKSPACE and four BUILD files. That’s what this blog post is all about.

First, let us look at package.json:

Our project depends on the npm packages TypeScript, Bazel, and its TypeScript rules. So far nothing new. Let us now dive into the WORKSPACE configuration file:

Keep in mind that this is a low-level introduction. In reality, it's very likely that you never have to manage your Bazel configuration by yourself.

The file above uses a language called Starlark, you can think of it as a subset of Python. Here’s what we declare:

Don’t worry if it the snippet above doesn’t look obvious. You can think of the load invocations as a require in Node.js with the difference that Bazel can fetch the dependencies from the network.

We’re going to go on a very granular level. We can directly map the individual modules of the project to separate Bazel packages, and in each package, we’ll define a target. As we mentioned above, we can think of the packages as directories and their corresponding files and the targets as build rules.

Each directory has a BUILD file (or BUILD.bzl if you prefer). Let us take a look at the BUILD file in the root of the project:

Above we first set the visibility of this package to the public, and after that, load two Bazel rules:

The ts_library rule we use to build the app target. The app target represents our programming language which wires the individual modules together. It depends on the lexer, parser, and the interpreter. In the directories of these modules, we have BUILD files with similar content. For example, the parser’s content looks as follows:

This time we use a glob to indicate the source files. Also, notice that the parser depends only on the lexer.

First, run yarn to install all the dependencies from package.json so that we can get the Bazel’s binary:

Now run (you may need to install graphviz before that):

The output of the command looks as follows: 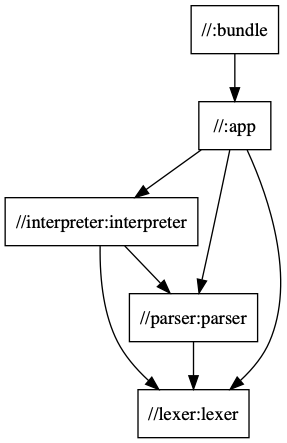 We can see the dependencies between the individual targets - :bundle depends on the :app target, which depends on the :interpreter, :parser, and the :lexer. The output //parser:parser means “the target :parser from the package //parser.

The first invocation of the command above may take some time because Bazel will load the dependencies of the workspace when it needs them. Each subsequent invocation should be instantaneous.

Now let us verify that everything works as expected by executing the produced bundle:

Once you build a target Bazel will create a bunch of symlinks in your workspace. They contain different build artifacts. If you prefer to get rid of them, you can configure Bazel with bazel.rc.

How about watching the files of the project and rebuilding on change? For the purpose, we need to install @bazel/ibazel and run:

With both ibazel and bazel we’ll rebuild given target only when any of its direct or transitive dependencies change.

Notice that in the ibazel example above we build the :app target. This is because we wouldn’t be able to demonstrate incrementality with the :bundle target since at the time of writing the Rollup.js rule for Bazel is still under active development.

In this blog post, we looked at Google’s build system Bazel. We explained some of the problems that Bazel solves to provide fast and scalable build solution.

In the second part of the post, we looked at a sample build setup for a small TypeScript project, where we compile a bunch of files and bundle them with Rollup.js. In the process, we explained what a workspace, a build target, package, and how we can configure them.

At this point, we saw one of the core strengths of Bazel - static dependency graph which allows neat optimizations such as caching and parallelism. Be tuned for the next post in which we’ll take a closer look at the performance implications.